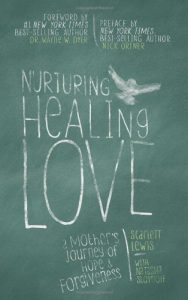 A book by Scarlett Lewis

“Following Jesse’s death, Scarlett went on an unexpected journey, inspired by a simple three-word message he had scrawled on their kitchen chalkboard shortly before he died: Norurting Helin Love (Nurturing Healing Love). It was as if he knew just what his family would need in order to go on after this horrible tragedy.”

This is an amazing account of  six year old Jesse Lewis’  journey through the Sandy Hook Elementary School massacre that took place on December 14, 2012. Jesse was one of 26 souls taken that day. This book is also the Story his mother’s, Scarlett Lewis’s journey of hope and forgiveness.

Jesse’s death is only PART of this story.

The unfolding of  Jesse’s observations and preparations before the shooting is astounding. The presence his spirit made after the shooting is the clearest illumination of spirit living on after the change called death that I have ever heard or read. The Courage and love portrayed by his mother is inspiring beyond words.

Scarlett shares her grief with an honest openness that takes the reader right into her horror and leads us to a place of hope and healing. From the day of the shooting, Scarlett realizes that her son is reaching out to his family. Scarlett had begun a spiritual journey earlier in her life to widen her traditional belief system. She opened herself up to new ideas and methods —how to heal herself and contemplate the world in ways that raised eyebrows. Now, in the face of the biggest challenge in her life, Scarlett opened to the hope and the love that her son was sending to his family from Spirit.

This is a must read for all who are experiencing deep grief from the loss of a loved one. This as a beautiful example of how we can make our own personal transition from grief of death and loss to living life in hope with our loved ones in spirit by our side.

I have lectured about this book at a few churches. As I spoke, the lights flickered in the church! The congregations in each church opened their hearts to the miracle of the messages Scarlett and Jesse have shared.  Many had already come together in groups to pray for these children that were lost at Sandy Hook. They have shared that this story is an answer to their own prayers concerning such an unexplainable tragedy. Thank you Scarlett, for your courage and for the light you have shown to all of us.

This site uses Akismet to reduce spam. Learn how your comment data is processed.